Fast-growing kelp forests can deliver biofuels, biofertilizer, animal feed additives, and even tasty, nutritious food – while sucking carbon out of the atmosphere in the process.

To create this all-encompassing explainer on the benefits of seaweed, we spoke to scientific experts and reviewed all of the latest reports and research.

» Check out our findings
» See the data

A sneak peek of our new project: Beautiful News

It surfaces and visualises all the amazing things happening in the world. The things we don’t see because we’re fixated on the drama and horror of the news.

It’s been a year in the making – research, visualisation and design. And it will gently unfold over this coming year – a chart a day.

The World’s Largest and Most Notable Energy Sources

What’s the world’s largest power plant? How does solar compare to nuclear, coal and gas? How much of the world’s renewable energy potential are we using?

Understanding the world’s energy systems isn’t easy, so we’ve made it a little simpler with this ranking of the world’s biggest and most notable power plants.

» Power through to the graphic
» See the data

A filterable chart of dataviz books that we think everyone should read.

We excluded books about specific tools or programming concepts, but you’ll find them in the full datasheet.

Crowdsourced with the help of the Data Visualization Society

Did we miss any? Send a suggestion.

» Check out our recommendations

Fact-Checking The Vegan Netflix Documentary ‘What The Health’

It’s been interesting to witness the abrupt mainstreaming of vegan and plant-based diets in recent years. But less interesting to have so many friends suddenly start lecturing me how cruel the meat industry is, how unhealthy red meat is, how environmentally damaging. Thank! You!

More striking is the amount of people who’ve said:

“Have you seen it? What the Health? The vegan documentary on Netflix. OMG. You gotta see it.”

So I did. I watched the What The Health documentary on Netflix, directed by Kip Andersen (sorry, SEO).

It is powerful, moving and shocking without being gory or alienating. But my journalistic spidey-sense started pulsing as I watched it. It’s kinda too powerful. Too certain of itself. Too sure. Some of the facts raised the BS-detecting hairs on the back of my neck.

So I gathered the team and we dove in to produce an interactive scene-by-scene, fact-by-fact visual analysis of the documentary. Have a play to see how true the film is.

It’s saddening because the scientific evidence is in, and vegans are right. Plant-based diets are a choice for good – health, emissions, animal welfare, land use, kindness. Every way you look at it, vegans, you are ethically correct. So please – there’s no need to lie.

» See the interactive
» Read the data

Rejoice! The Information is Beautiful Awards are now open for 2019.

It’s our eighth year celebrating the planet’s most awesome information design and we have $27,500 in cash prizes to give away, courtesy of our wonderful sponsor Kantar. Twenty-five expert judges, plus a public vote, will decide who takes home our coveted, 3D-printed trophy.

We have gold, silver and bronze awards in ten different categories plus six special prizes awarded by the judging panel. 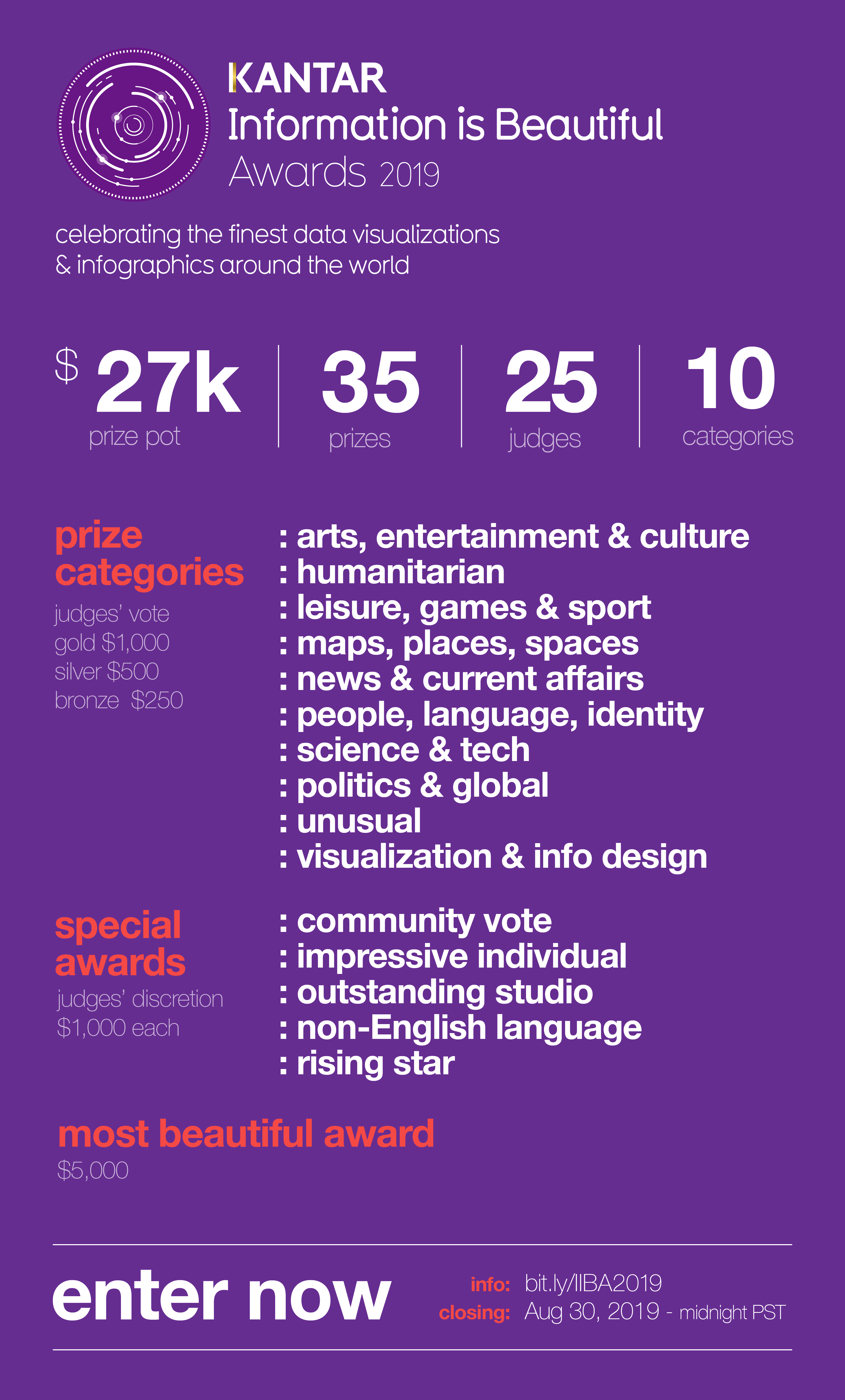 As usual, students and public whose work has not been professionally commissioned / published enter free. Studios / agencies, NGOs and media pay to submit work. Previous winners have gone on to land new clients, book deals, investment and jobs with hot startups.

Any piece created between 1st June 2018 and 30 August 2019 is eligible, as long as you have not entered it in any previous Information is Beautiful Awards.

» Browse all shortlists, longlists and winners dating back to 2012.
» Check out the 2018 Awards ceremony in New York.
» Discover what we look for in a great dataviz. 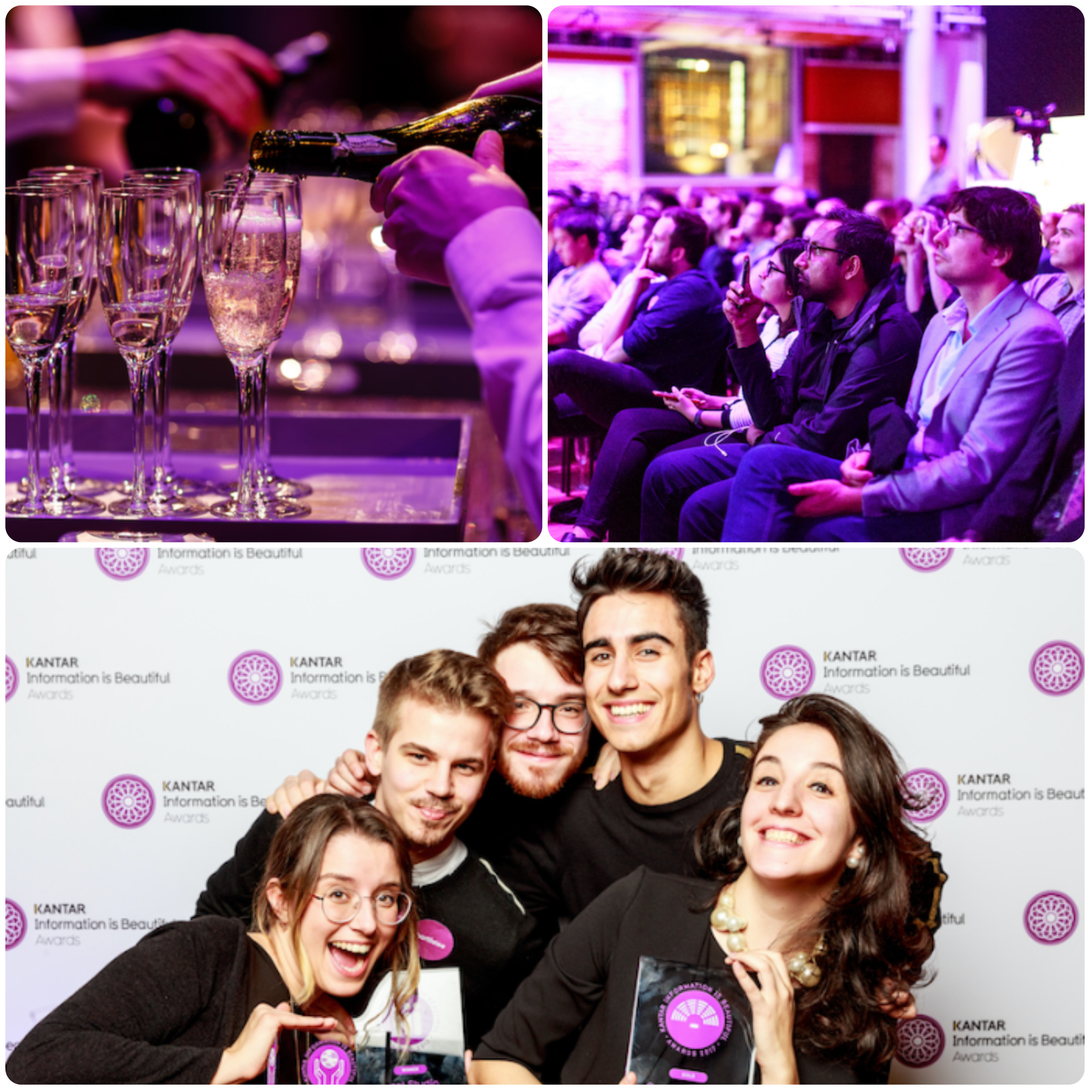 What is Methane And Where Does it Come From?

What is natural gas? Where does methane gas come from? Is methane a greenhouse gas? How much methane do cows produce?

All these questions are answered by our comprehensive methane cycle infographic.

Learn the Art of Data Visualization in NYC

Tickets are selling fast for our NYC workshop on 18 June.

David McCandless, founder of Information is Beautiful, offers you training on his process and method for creating successful dataviz and infographics.

Participants have described it as “awesome”, “amazing” and “one of the best I’ve attended” (check out more workshop feedback).

» Get your ticket now
» Other upcoming workshops