Unique times require unique thinking, right? We’re under the cosh here in the UK with unprecendented public cuts and austerity measures. Is there a potential revenue stream we’re missing? One right under our noses? One that could solve the university tuition fees crisis? And leave around £75M left for a very, very good party…

My latest graphic for The Guardian Datablog puts the case.

While on the subject, I wanted to mention a great exhibition in London. It’s called High Society. Curated by writer Mike Jay and the Wellcome Trust, it’s about the influence of (illegal) drugs on society and culture. It’s free. And features a couple of commissioned wall-sized graphics from me, including Drugs World and this Billion Drug-o-Gram. 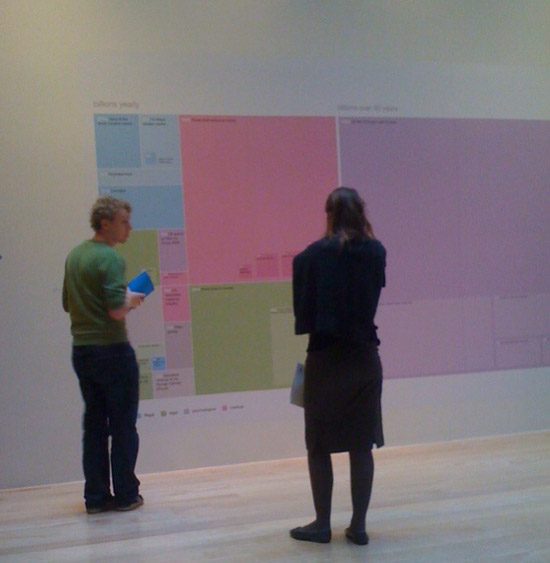 (If this image looks furtive, it is. You’re not allowed to take photos at the exhibit. Shortly after this was snapped, I was asked to leave the building! A real moment. For once in my life, I was able to say, with authentic indignation, “Do you know WHO I am???”)

In the course of preparing and researching the images, we came across a ton of interesting facts and figures about the drugs world. They’re all in this spreadsheet.

Particularly liked the data on which countries like which drugs.