How I Learnt To Stop Worrying And Love The Bomb (Kinda)

I felt alienated from The Guardian’s graphic about stockpiles of nuclear weapons. Was there a better way to depict the data?

UPDATE: Aug – I’m in the process of revising this diagram in light of all the comments (and flames!). Thanks all. If you can help me research the data, please email 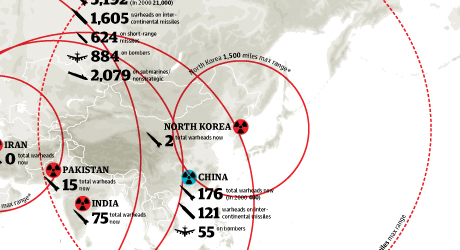 I felt the use of abstract figures made most of the data meaningless. Russia has 5192 warheads. America 4102. France 300. What does that mean? Is that a lot? I can’t relate to that.

There’s a single way I relate to nuclear weapons. By their destructive capability. I grew up watching Threads and The Day After. We were even made to watch those nuclear horror films at school. Those films branded our minds with the idea that nuclear weapons could destroy the world. They are Doomsday devices. They kill everybody. Nuclear War = End Of The World.

So, I thought of a better way to understand the data. Dump the raw totals. Instead visualize the stockpiles by how many times over they could destroy the world.  Yeah cool! And that would actually expose the ludicrous stupidly of nuclear weapons at the same time. *So clever*.

However, the idea rapidly unravelled. Here’s why…

I wasn’t expecting that. We only actually have 0.83% of what’s required to completely wipe out civilisation. We couldn’t do it if we wanted to.

Ah but we all live in cities now

I tried to recover a eye-popping stat with another quick calc. 50% of us live in densely populated cities now. Maybe we could wipe out all city-dwelling humanity. YES!

Unexpectedly, in making this image, the data forced me to change my mind.

In this case, it exposed the myth in my head, scorched long ago into my childhood imagination. The scene of many nightmares. That nuclear weapons could kill everything. Could wipe out civilisation.

No doubt, nuclear weapons are crazy devices. In the hands of mad people and mad regimes, they have a nightmarish potential for devastation. But they are not the end of humanity.

As the data reveals, we simply don’t have enough of them.